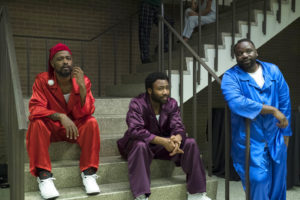 This image released by FX shows, from left, Lakeith Stanfield, Donald Glover and Brian Tyree Henry in a scene from the comedy series “Atlanta.” The program was nominated for an Emmy on Thursday for outstanding comedy series. The 70th Emmy Awards will be held on Monday, Sept. 17. (Guy D’Alema/FX via AP)

The 70th Primetime Emmy Awards are set to premiere on Monday, Sept. 17 at the Microsoft Theater in Los Angeles.

Written on the Academy of Television Arts & Sciences website it states that 23,000 members of the Television Academy “cast a ballot for the category in their field of expertise.”

The award show will feature numerous categories in the television field that are nominated for their talent on- and off-screen.

Various television networks received numerous nominations this year. According to the Academy of Television Arts & Sciences website, Netflix surpassed HBO with 36 nods, ahead of HBO’s 35.

The Hollywood Reporter announced that HBO’s “Game of Thrones” leads the way with 22 nominations, the most of any series. NBC’s “Saturday Night Live” and HBO’s “Westworld” fall behind with 21 nominations each.

Netflix’s “The Crown” and “Stranger Things,” HBO’s “Game of Thrones” and “Westworld,” FX’s “The Americans,” Hulu’s “The Handmaid’s Tale,” as well as NBC’s “This is Us,” are all up for nomination for “Outstanding Drama Series.”

“There are so many shows in the drama series category that I love. If I had to choose, though, I really hope ‘This is Us’ wins because it is such a cute series that makes you have mixed emotions every episode,” said senior Julia McLaughlin.

As for the “Outstanding Lead Actor and Actress in a Drama Series” category, it is full of more fan favorites that will make for an unpredictable winner.

Junior Allison O’Reilly said, “I think all of those actors could get the award, but Sterling K. Brown has to win for best actor, he makes me laugh all the time and is so talented.”

Other actors up for the Emmy include: “Ozark’s” Jason Bateman, “Westworld’s” Ed Harris, “The Americans’” Matthew Rhys, “This is Us’” Milo Ventimiglia, and “Westworld’s” Jeffrey Wright.

As for “Outstanding Lead Actress in a Drama Series” the nominees include: Claire Foy for “The Crown,” Tatiana Maslany for “Orphan Black,” Elisabeth Moss for “The Handmaid’s Tale,” Sandra Oh for “Killing Eve,” Keri Russell for “The Americans,” and Evan Rachel Wood who stars in “Westworld.”

Avid television viewers are also looking forward to seeing who wins the nods in the “Comedy Series” categories.

“I am a huge Shameless fan, so I was disappointed that it wasn’t nominated for Best Comedy Series, but I am glad that William H. Macy is nominated for best actor,” said junior Justin Weigel.

Along with Macy, the “Outstanding Lead Actor in a Comedy Series” nominees include: “Black-ish” star Anthony Anderson, “The Good Place’s” Ted Danson, Larry David for “Curb Your Enthusiasm,” Donald Glover for “Atlanta”, as well as “Barry’s” Bill Hader.

As for the “Outstanding Lead Actress in a Comedy Series,” Weigel is hoping for Lily Tomlin to take home the win: “Grace and Frankie is a fantastic show and Lily Tomlin deserves the Emmy for all the work she has done in that series.”

Other nominees include: Pamela Adlon in “Better Things,” Rachel Brosnahan for “The Marvelous Mrs. Maisel,” Allison Janney in “Mom,” Issa Rae for the show “Insecure,” and Tracee Ellis Ross for “Black-ish.”

Be sure to check out the rest of the nominations list at the Academy of Television Arts & Sciences website before the show airs next week. The ceremony will be broadcasted in the United States by NBC at 8:00 pm EST.