You are at:Home»News»World News: Here’s What You Missed 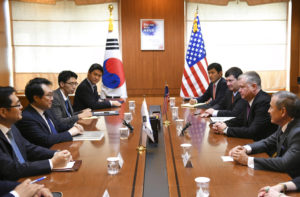 On June 12, 2018, the North Korean leader Kim Jong Un and United States President Donald Trump met in a historic summit. During the summit, the two men signed a document committing North Korea to work towards “the complete denuclearization of the Korean peninsula.”

The summit came after multiple verbal exchanges between the two leaders, including some through social media.

In a tweet on Jan. 2, 2018, President Donald Trump said, “Will someone from his depleted and food starved regime please inform him that I too have a Nuclear Button, but it is a much bigger & more powerful one than his, and my Button works!”

After their June summit in Singapore, Trump and Kim issued a vague statement about a nuclear-free peninsula without describing when and how it would occur. President Trump called off a planned visit to North Korea by Secretary of State Mike Pompeo last month, citing insufficient progress in denuclearization.

On Sept. 5, North Korean leader Kim Jong Un reaffirmed his commitment to a nuclear-free Korean Peninsula amid a growing standoff with the United States, his state-controlled media reported Thursday after a South Korean delegation met him to set up an inter-Korean summit.

South Korean President Moon Jae-in says he has high expectations for his third summit with North Korean leader Kim Jong Un on Sept. 18-20. North Korea has reiterated its calls for the United States to agree to a declaration to formally end the Korean War, which it says President Donald Trump promised during his June summit with Kim Jong Un.

Brazil’s National Museum in Rio de Janeiro, which suffered a massive fire late Sunday, boasted the largest archive of historical artifacts and documents in Latin America, some 20 million pieces from around the globe.

The esteemed museum, which houses artifacts from Egypt, Greco-Roman art and some of the first fossils found in Brazil, was closed to the public at the time of the fire, which broke out at 7:30 p.m. Sunday local time, it said in a statement. 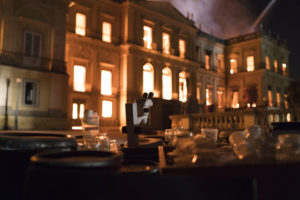 Salvaged equipment lies on the ground as flames engulf the 200-year-old National Museum of Brazil, in Rio de Janeiro, Sunday, Sept. 2, 2018. According to its website, the museum has thousands of items related to the history of Brazil and other countries. The museum is part of the Federal University of Rio de Janeiro. (AP Photo/Leo Correa)

Roberto Robadey, Rio’s fire chief, stated that the fire hydrants were dry when emergency services arrived and the crews had to retrieve water from a nearby lake. The building also lacked a sprinkler system.

One of the museum’s most notable pieces is Luzia. Discovered during an excavation in 1975 outside of the Brazilian city of Belo Horizonte, the fossilized remains sat in storage for two decades.

In the mid-1990s, tests by scientists determined it was the oldest fossil in the Americas, dating back around 11,500 years. It was given the name “Luzia,” homage to “Lucy,” the famous 3.2-million-year-old remains found in Africa.

President Michel Temer called it “a sad day for all Brazilians.”

In a statement, Temer said, “Two hundred years of work, investigation and knowledge have been lost.”

According to BBC News, “Luiz Fernando Dias Duarte, a deputy director at the museum, expressed ‘immense anger,’ and accused Brazilian authorities of a ‘lack of attention.’ Mr. Duarte told Globo TV that a 5.3-million-dollar modernization plan agreed in June would have included modern fire prevention equipment, but only after October’s elections.”

The Great Pacific Garbage Patch (GPGP) is one of five garbage patches located in oceans around the world formed by the accumulation of plastic waste. The GPGP is estimated to have a surface area of 618,000 square miles, which is twice the size of Texas. It is located between Hawaii and California.

An inventor from the Netherlands, Boyan Slat, founded The Ocean Cleanup, a non-profit organization with a goal of developing technologies to rid the world’s oceans of plastic. 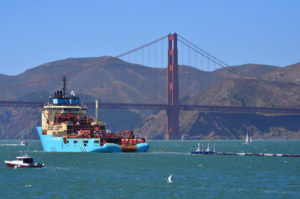 A ship tows The Ocean Cleanup’s first buoyant trash-collecting device toward the Golden Gate Bridge in San Francisco en route to the Pacific Ocean on Saturday, Sept. 8, 2018. Once deployed, the boom will form a U-shaped barrier to trap plastic and trash that currently makes up the “Great Pacific Garbage Patch.” (AP Photo/Lorin Eleni Gill)

The organization was founded in 2013 and now has a team of more than 70 engineers, researchers, scientists, and computational modelers.

According to their website, “every year, millions of tons of plastic enter the ocean. A significant percentage of this plastic drifts into large systems of circulating ocean currents, also known as gyres. Once trapped in a gyre, the plastic will break down into microplastics and become increasingly easier to mistake for food by sea life.”

The launch date for the project was Sept. 8. The organization said that it aims to cut the GPGP by 90% by 2040.

The Associated Press contributed to this article.